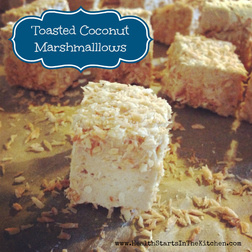 Making marshmallows isn’t as complicated as I assumed, I stumbled upon Mommypotamus’s Recipe for Homemade Marshmallows and I just HAD to make them… Of course I had to put my coconut-sugar twist on them!

In the bowl of your mixer combine, and let sit to soften:
3T Grass fed beef gelatin
1/2c Water

In a small pot over medium heat with a candy thermometer, combine:
1/2c Water
1c Coconut Sugar or raw honey
Pinch of Sea Salt
3/4t Vanilla Extract (click HERE to make your own!)

Heat to 240 degrees (soft ball stage) then slowly pour into you mixer while it’s running on low. Once all mixed throughly, increase to high speed and set your timer for 10 minutes. (Don’t watch the mixer, you’re stand there thinking “this will never work” just walk away and don’t come back until the timer goes off

Remove the marshmallow from the pan, by lifting the parchment paper. Cut into individual squares and roll in any loose coconut. Let them set out at room temp for a couple hours to firm up the cut edges. Keep these in an airtight – but you’ll probably eat them all up before they’d get stale anyway!